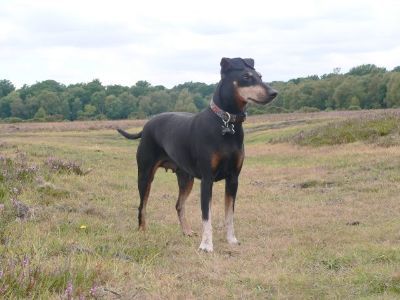 Bracken stormed into our lives in January 2001 and things were never going to be the same again!!

She was a muscular bundle of energy who had only two speeds 'full speed ahead or full stop'. At puppy training classes they said she was untrainable and after trying to wrestle her into the 'sit position' gave up. I found that Bracken used to go to classes take note of what was required and then do it the following week with no fuss. To this day the trainer is convinced I spent hours trying to get her to sit when in fact all it took was a piece of toast and ten minutes!! Manchester terriers are really far too bright and run rings round us mere humans most of the time! Ringcraft was a similar story and the first few shows a nightmare but it soon became clear that it was more a question of whether she wanted to take part on that particular day! Anyway dispite this Bracken won four CC's, two BOB and one RCC in 2002 and became a Champion in August 2002 at The Welsh Kennel Club. This made her top-winning Manchester Terrier bitch in that year. In 2003 a RCC followed and a fifth CC and BOB at Bournemouth Championship Show in August 2003, whilst pregnant (Not bad for 'I might do the odd Open Show with her!'). Bracken produced five gorgeous puppies in September 2003 and having got her figure back came back to the show-ring in the Spring of 2004. At West of England Ladies Kennel Society in April 2004 in she gained her sixth CC. (Having had a snack of a pot of E45 cream the night before!!) and a further RCC at The Welsh Kennel Club in August 2004. Wins by her progeny in 2004 meant she was also the winner of the British Manchester Terrier Clubs Ch. Prioryhill Bathsheba Trophy for the Brood Bitch producing most first prize winners at Championship Shows in 2004. 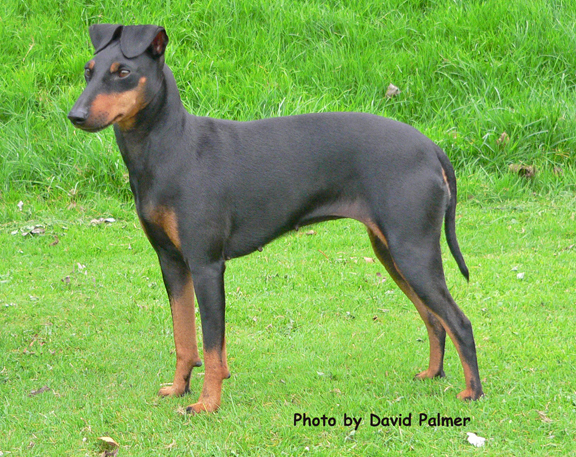 In 2005 Bracken was shown lightly winning BOB at Windsor Dog Show and her seventh CC at Bournemouth Dog Show whilst her Son Smeagol won the dog CC and BOB. Following this a week later her son Egloshayle Black Falcon at Newtonian gained his third CC and became a Champion at the Welsh Kennel Club. In 2006 Bracken was only shown twice and won a RCC at Crufts which seems a fitting accolade to mark her retirement from a very successful show career. Also in that year we won the Knox Trophy as the breeder of the dog/bitch winning the most CC'S in the year. As her son Champion Egloshayle Black Falcon at Newtonian won four CC'S with three Best of Breeds and four RCC'S. In 2007 a repeat mating produced four puppies, one bitch and three dogs. The bitch Lady initially joined our show-team however it became apparent that that she needed more individual attention than we could give her and did not really enjoy being at the bottom of the pack consequently after much heart-searching she went to live with our very good friends Chris & Susie and her brother Ruger 'Egloshayle Major Derringer'. Ruger was only shown lightly as a puppy but went Best Puppy at LKA which qualified him for Crufts 2008 where you may have seen him on the television with Ben Fogle! In 2008 her daughter from her first litter 'Sami' Egloshayle Blsck Samphire achiever her third CC and became a Champion at National Terrier.(Five years after Bracken won her first CC there!). In 2008 Bracken produced three more puppies by Champion Brookstream Marcus Banks. All three went to excellant pet homes. In 2011 her daughter 'Tan' (Egloshayle Tangleberry) produced three bitch puppies and 'Annie' (Egloshayle Fallen Angel) has joined the Egloshayle pack from Yorkshire. Bracken is mother to two Champions, grandmother to one and has been influential in other lines producing Champions. Her grandaughter Lily was made up to Champion nine years to the day that Bracken achieved her crown at the same show.

Sadly in December 2013 Bracken departed this world and now runs free and without pain with all the other dogs that have gone before.