otherwise known by her pet name as "Sami." 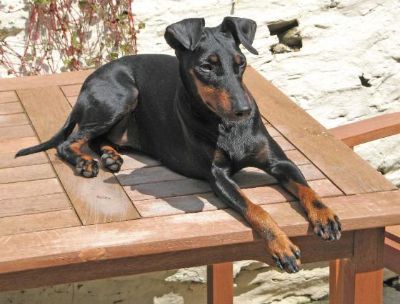 Sami was the first-born of Brackens puppies and although this would make no difference to our choice of which to keep she caught my eye as soon as she was born. The poor thing was pretty battered but immediately set about feeding with gusto and had an hours start on her siblings in the food stakes! She has never looked back and it is more than any of the other dogs would dare do to go near her food bowl when she is eating! After Christmas she started puppy classes and much like her mother just picked up what she had to do by watching all the others! She was applauded for walking up and down the hall on her lead beautifully only the second time she had a lead on - ring craft was the same story although she was not keen on big dogs having been chased on several occasions by bigger dogs into the main road and off a cliff!. She is generally pretty well behaved and gets on well with the rest of the 'pack'. She is also a very affectionate creature and is always ready for a cuddle. Sami also enjoys gardening with the other Mannies, and between them they managed to bring all the fronds from a very large Pampas Grass plant down the garden-through the dog-hatch and carpet the entire dining room floor with it! It was more than even the 'Dyson Animal' vacuum could deal with! Bracken also introduced her to frog-hunting much to my dismay (and the shocked frogs!). 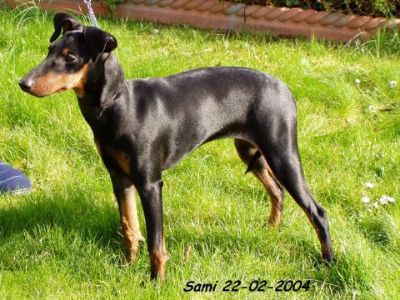 In 2004 Sami had her first success at Bridgewater & District Canine Society when she went BP and BOB beating both Auntie Ivy and her brother Smeagol (Champion Egloshayle Black Falcon). However Smeagol had done the same to her the previous Saturday at Torquay Dog Show and he won the Terrier Puppy Group!

At West of England Ladies Kennel Society Sami was Best Puppy Bitch in the breed but was pipped at the post for Best Puppy by Smeagol. However we then went into the Purina Pup of the Year contest under Zena Thorn Andrews (more in hope than expectation!) and came first in Minor Puppy Bitch out of a very good entry! I was so taken aback I nearly left the ring without the critique and we won £10!! At Bournemouth Championship Show she was placed first in the Pup of the Year Contest in the bitch stakes on Terrier and Pastorel Day and won £20.00!! During 2004 Sami was best puppy in the breed twice at Championship Shows and at most of the other shows stood second to her brother for best puppy. She was however placed on numerous occasions in the Pup of the Year contest and was placed first in her class eight times at Championship Show level in the year culminating in her first RCC at Midland Counties in October 2004.

In 2005 Sami attained eleven first prizes at Championship Shows and gained four RCC'S. As a result she won the Aireboro Trophy for the bich winning most RCC'S in the year. She was also placed as third highest terrier in the Vitalin Bitch of the Year Competition.

In 2006 she won her first CC under Terry Thorn at Blackpool - a great thrill to have won this under such a well renowned and respected Judge. She also won another RCC.

In 2007 she won a further CC and then finally in 2008 she gained her crown at National Terrier under the breed specialist Stacey Oxley.

Once Sami achieved championship status she retired from the ring as she never really liked showing and did it very much under sufferance most of the time! However in 2010 she appeared quite happily in the Breeders stakes with her two daughters and niece where they won the Manchester Terrier Breeders class at Leeds Championship Show. She is also made an appearance at the British Manchester Terrier Championship Show in the veteran class, just to keep her 'paw' in and keep an eye on her winning progeny!

In 2009 Sami gave birth to a litter of five puppies,three bitches and two dogs. Tornado 'Egloshayle Sea Lord' went to live with Jean in Plymouth and also embarked on a successful start to his show career and was best dog puppy at Bournemouth Championship Show 2010 together with many wins at Open Show level and Companion Dog Shows as well, due to personal circumstances he then retired from the ring. Otis 'Egloshayle Sea Eagle' lives with his owners on a smallholding in Somerset where he helps round the farm and Urchin 'Egloshayle Sea Urchin' also lives on an estate in Somerset where she catches rabbits for a pastime! and is now the proud mother of two litters of puppies making Sami a proud grandmother. Gladys 'Egloshayle Sea Sprite at Rattustrap' went to our good friends in the breed Phil, Estella and Bobby. Although we all thought Gladys was nice she exceeded all expectations and had a phenomenal puppy career. She gained her first RCC at just six months and won numerous BOB and group wins at Open Shows and puppy wins at Championship Shows culminating in Terrier Puppy Group 2 at Birmingham City Championship Show and reserve best bitch in breed at Darlington Championship Show. Following these wins she won the BMTC Puppy of the Year 2010 and 'Our Dogs' Top Puppy 2010. Gladys then retired from the show ring and is the proud mother to two litters of puppies.

The fifth puppy Lily 'Egloshayle Sea Lily' returned to live with us following a relationship breakdown and has done phenomenally well winning the BMTC Millennium Puppy Cup in 2010 and having had a rest from the show scene over winter came back to win first in her class at every Championship Show culminating in achieving her title in the space of one month in the summer of 2011!! Since then Lily has only been shown lightly at Championship level but has many successful wins at Open Show level. In 2016 she became a proud mum to five puppies. A repeat mating in early 2011 produced Egloshayle King Arthur who went to live with Kristiina Tiainen in Finland and has had a very successful show career and has sired some top-winning progeny. Egloshayle Lady Morwenna (Mabel) has stayed here at Egloshayle and became a mum to six puppies in 2014 . Egloshayle Lady Guinevere (Connie) lives with our good friend Sarah in the Cotswolds and is mad keen on cricket (particularly the teas!), she has also had a litter of puppies one of which Agnes stayed with her. Egloshayle Sir Lancelot (Dave) lives with friends Claire & Phil Hill-Smith in Guernsey and Egloshayle Sir Percival(Maverick) lives with his companion 'Goose' the beagle in New Zealand with Elspeth & Tom Burt.

Sami is now enjoying her well earned retirement here at Egloshayle and making sure she keeps her kids and grandkids in line!

However in the summer of 2015 at the grand old age of twelve Sami took part in a couple of 'fun' shows and won large veteran classes. Following this as she seemed to enjoy it she entered the British Manchester Terrier Championship Show and was awarded Best Veteran Bitch under breed specialist Carol Dunford. In the autumn she won Best Terrier Veteran at two Open Shows in Cornwall and has therefore qualified for Top Dog of Cornwall 2015! Following in her mother Bracken & Auntie Ivys footsteps. The competition takes place in early 2016. 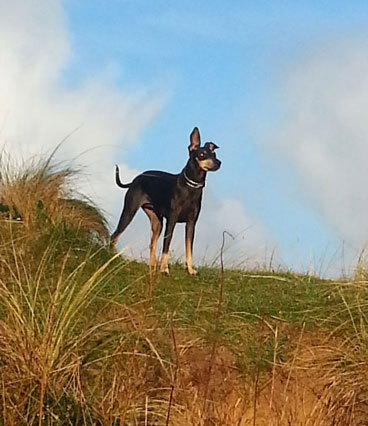