Other wise known as "Rosie" 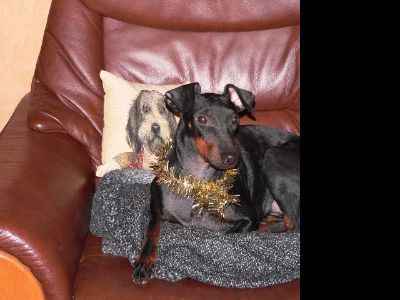 Rose was one of four puppies in Ivys' only litter and was one of the most forward going from the start. She was certainly mischievous and formed a somewhat unholy alliance with Lily. Rose was the digger and boy could she dig! We ended up with a garden with holes approaching caves and any semblence to a lawn was gone! Rose was also a hunter and was mesmerised by birds -ever hopeful she might catch one. Roses' first show was in monsoon conditions at Richmond Dog Show 2008 where she came second in a big class against the top winning bitch puppy of the year. The Judges comment 'she was unfazed by the weather conditions'. At Midland Counties Championship Show she was a very creditable third in the puppy stakes. She was only lightly shown for the rest of the year gaining several Open Show wins and following a rest came out in the Spring of 2009 to go Best of Breed at Terrier Club of Devon and Cornwall (beating both her father and grandfather who were both Champions) and then the following week Best of Breed -Terrier Group 1-Puppy Terrier Group 1 - Reserve Best in Show and Best Puppy in Show ! at Ilfracombe Open Dog Show. 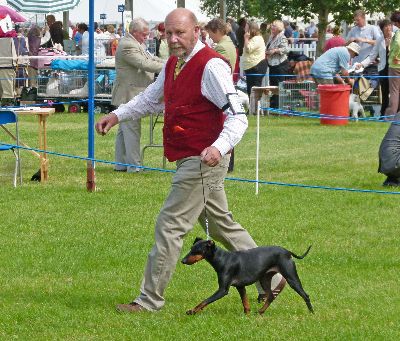 This qualified her for the Top Dog of Devon competition which she competed in later in the year. She also had numerous other BOB and Group placings at Open Shows. In 2009 Rose also continued to be placed highly at Championship Show level including a placing in the Petplan Junior Stakes at Welsh Kennel Club Championship Show. She was also Best in Show at the British Manchester Terrier Limit Show in August. Her numerous wins at Open Show level led to her gaining her Show Certificate of Merit early in 2010. Following this she continued her winning ways in both the breed and at group level during the year Also in this year Rose continued to be well placed at Championship Show level culminating in her first CC and Best of Breed at Paignton Championship Show in August 2010 under Lesley Brander followed by her second CC and Best of Breed a month later at City of Birmingham Championship Show under Fred Gadd culminating in a Reserve CC under Margaret Clowes at Midland Counties in October 2010. She also won the BMTC Sorisdale Cup in 2010 for most wins at both Open and Championship level. Rose was also in the team which consistently won Best Breeder in the Breed during 2010 culminating in the Egloshayle team winning the BMTC Tetani Breeders Trophy for most wins at Championship Shows in that year., Rose continued her winning ways in 2011 with numerous wins at both Open and Championship level culminating in her third Challenge Certificate and Best of Breed at Paignton Championship Show under breed specialist Mrs Gill Knight. This gave Rose her crown during the 'Egloshayle Winning Weeks' in the summer of 2011 and she pipped her cousin Lily to her title (by a week!). She was also in the Egloshayle Breeders Team which appeared in the final at Crufts 2012.

In late 2012 Rose had a litter of three boys(her boy band) by Browdel Potters Pickles. They all went to wonderful pet homes with Beau with Che & her family in Bath,Jack with Nick & Tammy in Poole and Chay with Rosemary in Kent.

Very sadly Rose was taken from us before her time in December 2013 and now runs free with Bracken who we lost two weeks earlier and all her doggie friends. Miss you Rose X