otherwise known by her pet name "Mabel" the loveable pest. 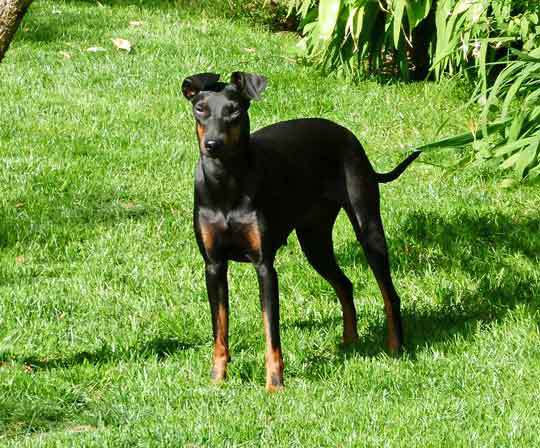 Mabel was one of of five puppies from a repeat mating with Ch. Newtonian Slim Shady JW Schm that Sami had in early 2011. We decided to keep Mabel as she was one of the best constructed puppies that we had ever bred or seen and her movement was (and still is) second to none. However we were always aware that she was a 'big' girl and therefore never planned to show her a great deal. We decided that her qualities meant that with the right dog she could be invaluable in our breeding plans. She has however got the most lovable nature and wants to meet everyone. She represented the breed at Discover Dogs at Crufts in 2012 and although still only a youngster loved the attention she received from everyone, young and old and even got a brief showing on national tv! 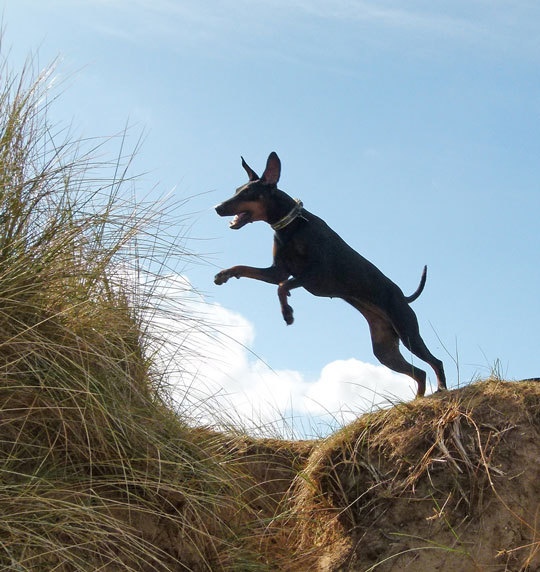 Mabel has only been lightly shown and despite her clowning around in the ring has won very well at open shows including Terrier groups and group placings. In 2012 she was only entered once at Championship Show level,at Crufts where she achieved an excellent second in Junior Bitch. In June she was well placed in the multi-discipline event at the 21st European Manchester Terrier Happening at Witney, Oxfordshire. In the same year at Devon & Cornwall Terrier Club Show she was placed fourth best in show under Jean Lanning. She also qualified for Crufts 2013.

Other than the odd open show where she continued to win well Mabel has not been shown since 2013 however in August of that year we attended Martin Clunes' Buckham Fair in Devon and at the companion dog show, out of a large entry she won the Open Terrier class with a very smart 'ponyskin' collar as the prize! 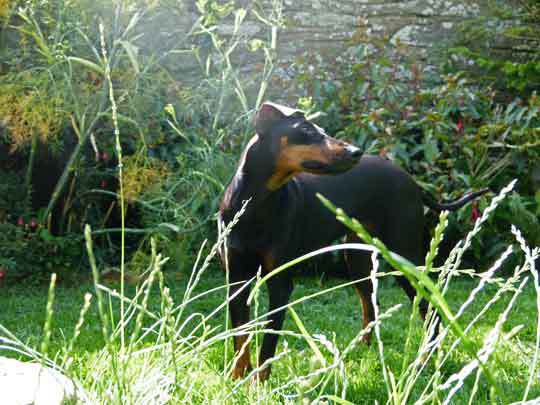 In 2014 Mabel had a litter of six puppies, three bitches and three dogs with 'Bodie' -Ch Calastoa Man in the Mirror for Dobermation.

Mable continues to 'attempt' to assert her authority over the other Mannies using her size but generally does not succeed! However she is very loveable and found she had a 'forte' for running with our dog sitter however her dietary intake has to increase dramatically if she takes this exercise and stop her looking like a whippet!

She did however take time out to attend the Royal Cornwall Agricultural Association Open Show in June 2015 where against large competition she won Best of Breed! (She can do it when she wants to!)

Mabel has now retired to life of travel and long walks and being a loveable pest around the house.