Otherwise known by her pet name"Annie" 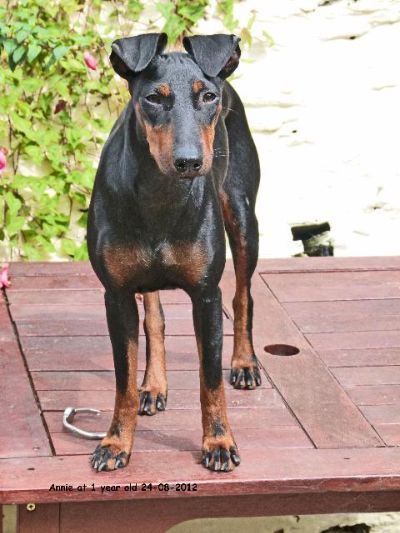 Annie is a complete departure from the breeding lines that we have been using and this coupled with her 'clear' Von Willibrands status makes her an invaluable addition to our breeding plans. Her mother is (Fergi) Egloshayle Tangleberry who was from Bracken's third litter.

Fergi lives with Annies father (Rio) Wystry Magnum and their owner Dave Crook on Saddleworth Moor near Manchester.When Fergi went to live with Dave it had always been the intention to possibly have a puppy back from her at some stage in the future. However it actually happened rather sooner than we anticipated and Annie came to live with us in October 2011! Her two sisters went to pet homes and one of them 'Pepper' lives near St Austell in Cornwall with our good friends Nicki & Wayne Hooker.

Annie has the most wonderful temperament and loves everyone and most dogs that she meets. In fact she is so effusive in welcoming people it can be a little overwhelming! She looks on a dog show as a social event to meet all her friends and has therefore been relatively easy to show due to her happy go lucky attitude.

Annie was shown successfully at Championship Shows during 2012 culminating with a first in Post Graduate Bitch at Midland Counties in October which qualified her for Crufts 2013. She also took part in the Kennel Club Breeders Stakes at several shows winning with her relatives on several occasions. At Bath Championship Dog Show she was second in the Puppy Bitch Stakes. In June she was well placed in the multi-discipline event at the 21st European Manchester Terrier Happening at Witney,Oxfordshire. She also had a successful year at Open Show level with numerous group placings and qualified for the Top Dog of Cornwall competition.

In 2013 due to our decision to reduce the number of Championship Shows that we attend Annie was shown infrequently at this level but won well with the highlight being a first in Limit bitch at the National Terrier Club show which qualified her for Crufts 2014. However Annie continued to win well at Open Show level and won Terrier Group 1 at Minehead show at Dunster in August.

In 2014 Annie took a break from the show ring for maternal duties and in May produced a litter of six bitches by Egloshayle Sea Lord. Annie turned out to be 'earth mother personified' and adored her puppies with a passion but at the the same time instilled discipline so that she could play with them (which she did incessantly) without being harassed by them! From this litter five have gone to wonderful homes and one, Esme has stayed here with us at Egloshayle. Ruby has gone to live with Che and family and her brother Beau from Roses' litter and now runs round the farm they live on in Derbyshire, Bonnie lives with Jenny, Peter, Freddie & Evie in Bristol, Pixie helps run a hotel in Weston Super Mare with Andrew and his daughter Beatrice and Ruby lives with Marsha & Dean in Exeter and went surfing on her first day away from her mum! Scully lives with Mary, Paul and her sister Chilli from Mabels litter in Bournemouth and is being lightly shown. All the puppies have inherited their mothers happy go lucky temperament and are pretty unfazed by anything that happens to them.

In 2015 Annie returned to the show ring with renewed enthusiasm and has won well at local shows to include qualifying for the new 'Vulnerable British and Irish Breeds Competition' at Crufts 2016.